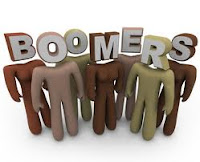 Baby Boomers “are the most famous generation in American history.  The U.S. Census Bureau defines the Baby Boomers as those born between January 1st, 1946 and December 31st, 1964. This gigantic generation has transformed America as they have passed through every stage of life. Now they are getting ready to retire. Beginning January 1st, 2011 every single day more than 10,000 Baby Boomers will reach the age of 65.  That is going to keep happening every single day for the next 19 years, until 2029.”
SOURCE: http://endoftheamericandream.com/archives/in-2011-the-baby-boomers-start-to-turn-65-16-statistics-about-the-coming-retirement-crisis-that-will-drop-your-jaw


Having been born almost smack dab in the middle of this 19 year range of post WWII population blast, I know I speak for many of my fellow Baby Boomers when I say in the coming years, we want to show up totally opposite of the predictions.  According to the American Hospital Association by 2030:
_ More than six of every 10 Boomers will be managing more than one chronic condition.
_ More than one out of every three Boomers – over 21 million – will be considered obese.
_ One of every four Boomers – 14 million – will be living with diabetes.
_ Nearly one out of every two Boomers – more than 26 million – will be living with arthritis.
_ Eight times more knee replacements will be performed than today
SOURCE: American Hospital Association. (2007). When I’m 64: How Boomers Will change Health Care. Retrieved September 16, 2011 from www.aha.org/content/00-10/070508-boomerreport.pdf

It is now common knowledge that the over 65 population will nearly double as a result of the aging Boomers and we want to be the 21st Century “Blue Zone” generation, as described by Dan Buettner is his New York Times Bestseller, The Blue Zones: Lessons for Living Longer From the People Who’ve Lived the Longest .

What is a Boomer to do? The fact of the matter is that it is not complicated; however that in no way implies that it is easy to break our old habits of excess and convenience. It all boils down to prevention. The power to choose sensible precautions that will lessen the impact of aging is as simple as cutting our consumption of that which is refined and processed. Above all get the water in and get the white out!
Posted by Dr. Velonda at 7:59 PM No comments: